Why a modified tourism plane (or a microlight aircraft) can’t become a GOOD tow plane ?

For the same reasons which make that a seaplane is a bad plane and a bad boat:

In order to illustrate these remarks, the graph below watch the variation of the powers during the flight .
In the X-coordinate we find the air speed and the ordinate the power. 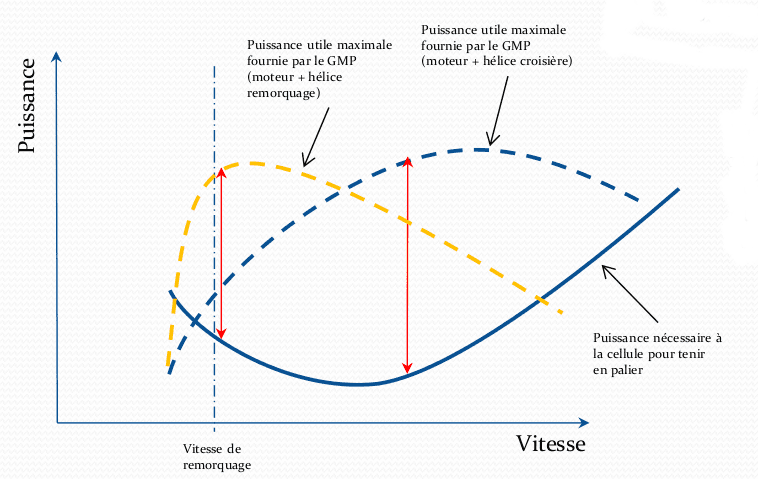 The lower blue curve (parabola opened upwards) represents the power consumption of the airplane level flight at various speeds. There exists a speed to which consumption is minimal and which if one flies more quickly there is a larger consumption of energy due to more important frictions in the air.
At the other side (decreasing speed), power consumption increases too. This is due to the fact that it is necessary to increase the incidence of the wing to hold on the level flight as speed decreases. This additional energy consumption is with the particular flow which exists around the wing with these strong incidences (important deviation of the airflows and generation of marginal swirls).
This curve is related to the airplane shape (surface wing, wing aspect ratio, surface quality,…) and the mass of the plane. Note that it will be judicious for a private tourism plane to have the hollow of this curve as possible on the right and that consumption at “high-speed” be the weakest. If you modify a private tourism plane to make a tow plane, the result from this will have the same specific power curve and will be a big consumer at 120 km/h.

The higher curve (dotted blue) (parabola opened downwards) represents the useful output generated by the power-plant, i.e. the power which it remains on the outlet side of the propeller which is opposed to frictions and allows the climb of the plane.
This blue curve is typically that of a private plane for which one seeks to obtain an useful power high at an important speed (cruising) to overcome frictions and of this fact of maximizing this speed.

The useful power is that communicated to the surrounding fluid. It is the result of the power at the engine shaft (at RPM given) multiplied by the efficiency of the propeller (efficiency due to the shape multiply by the propulsive efficiency !!).
There exists at each speed of flight an equilibrium between the power consumption of the propeller and the power delivered by the engine. It follows from there a number of revolutions per minute resulting from the couple propeller + engine.
To shift this curve to the right (high-speeds) is obtained by increase in the pitch of the propeller. This goes against the performances on takeoff (low power useful to low speed) which will be then poor.

The dotted yellow curve would be thus the only true adaptation which one can make to approach the ideal powerplant for the mission of towing (120 km/h). Indeed, by reducing the pitch of our cruising propeller (without modifying its diameter = airplane geometry constraint), one shifts towards the left the speed of maximum power of our curve (useful power). This is simply what is practised on the current “tourism” tow planes.
Thus the performances are increased on takeoff and the climb is better at low speed to the detriment of maximum cruising speed.
Note that on a plane equipped with a constant speed propeller (variable pitch) this change is made in a linear way. One can then thus have this maximum power at each speed of flight (useful!).

However, that is not as magic as it appears because, with constant diameter and constant engine power , the propeller efficiency falls down to a significant degree with the reduction of flight speed.Thus, the 180 HP of our Lycoming O-360 it will remain only approximately 66% for the flight to 120 km/h (to fight frictions and to allow the climb) whereas with the cruising propeller to 240 km/h 80% of the engine power remain useful for the flight.
Propeller efficiency fall down at low speed and we cannot change diameter of the propeller. Then try to increase the power!
This solution also was tested (this is the other adaptation). Passage from 180 to 235 HP… Increase of the performances yes, a little, but not in proportion of the variation of power and engine price.
Using a bigger engine adds mass .
Increasing the mass is the first responsible parameter in bad result of climb. Adding 55 HP, this is a adding of 55 kilograms.
This is also 55 HP to add in a propeller which did not change (even diameter). It is an overload of the disc propeller and once again cause a drop in the propeller efficiency.
Thus on the +55 HP how much can we recover ?
A little less than 20, I would say.
Is this profitable considering the variation of consumption of 100LL between the two engines ?
And on resulting vertical speed, taking into account the variation of mass ?
…Very few certainly.